Mitigating Exposure to Traffic Pollution In and Around Schools

The aim of this guidance document is to translate complex science into simple action points that enable schools, children and communities to make informed decisions and help reduce the exposure of school children to air pollution.

The exposure of children to air pollution is associated with a lack of alertness and concentration, as well as bronchitis, stunted lung development, and an increased risk of long-term conditions including asthma and other respiratory diseases. Children are more vulnerable to exposure than adults due to their incomplete lung development, low breathing height and high physical activity and breathing rates. However, for accessibility, many schools are located near main roads, vehicular emissions from which readily infiltrate school premises, including classrooms. In the UK, more than 2,000 schools and nurseries are near roads with high levels of air pollution4, including toxic pollutants such as particulate matter less than 2.5 micrometre in diameter (PM2.5). The UK also has a higher prevalence of childhood asthma than any other European country.

The use of cars to take and collect children to and from school intensifies pollution hotspots in and around school premises. In England, car use for school journeys has doubled over the past two decades, and as many as 1 in 4 cars on the road at morning peak times are taking children to school. Child exposure may be unnecessarily increased by engine idling (stationary vehicles with engines running) and vehicle acceleration-deceleration, both in and near school premises, during drop-off/pick-up hours. 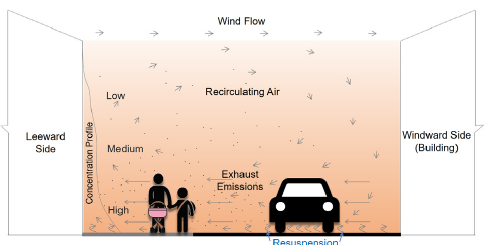 The above figure demonstrates the low breathing height of children and in-pram babies, who are at a height where vehicular emissions are highly concentrated (adopted from Sharma and Kumar). The breathing height of young children is between 0.55m and 0.85m above ground level and vehicle exhaust pipes usually sit within 1m from road level. This increases their vulnerability to air pollution exposure.

While an active control system (e.g. reducing exhaust emissions at the source) is invariably the most effective solution, other evidence-based strategies can be adopted to reduce pollution concentrations and mitigate exposure in and around schools. However, a holistic approach is required from those directly contributing to and/or affected by pollution to make a real difference at grass-roots level6. A successful exposure mitigation strategy requires multifaceted actions that target school children, schools and the local community.

The aim of this guidance document is to translate complex science into simple action points that enable schools, children and communities to make informed decisions and help reduce the exposure of school children to air pollution.

The full publication can be found at: https://www.surrey.ac.uk/sites/default/files/2021-01/mitigating-childrens-exposure-to-traffic-pollution-english-version.pdf

The 30th anniversary seminar of ISBE
Back to Top

The members are divided into: FELLOWS, regular members and corporate members. Note: FELLOWS are honorary members nominated by the ISBE Scientific Committee.